This guide will go through the steps required to setup a vue-cli applicaiton that works with a Coldfusion/Lucee powered JSON backend.

It wouldn’t take much to swap out the backend for static JSON, PHP or anything other language. The point of the guide is to get a proxy setup so the local node development server on one port (e.g. npm server launching 127.0.0.1:4000) can happily consume the JSON data being supplied from another port (e.g. commandbox start launching 127.0.0.1:8080 )

This is going to allow fast application development in Vue.js with vue-cli, making use of hot module replacement that comes with the underlying webpack, alongisde my preferred method of back end scripting, which is all written in .cfc files and returning JSON data.

At the end we’ll go over getting this into production, on a DigitalOcean based Ubuntu server using Nginx. Again, it won’t take much tweaking to get this working on any provider, any OS, any webserver. The concepts should carry across all platforms, the key thing here is getting the local development proxy working.

Getting the back end started

In the past I’ve generally worked with Adobe Coldfusion but for this project I’ll be using Lucee which is described as the following :

The main thing to note is it’s free and open source so you do not need to buy a license from Adobe to use CFML/CFScript. Only if you specifically want to use Adobe Coldfusion.

You can download CommandBox (with or without a JRE) as a zip, once you’ve unpacked it you can double click the Box.exe to launch the CommandBox window 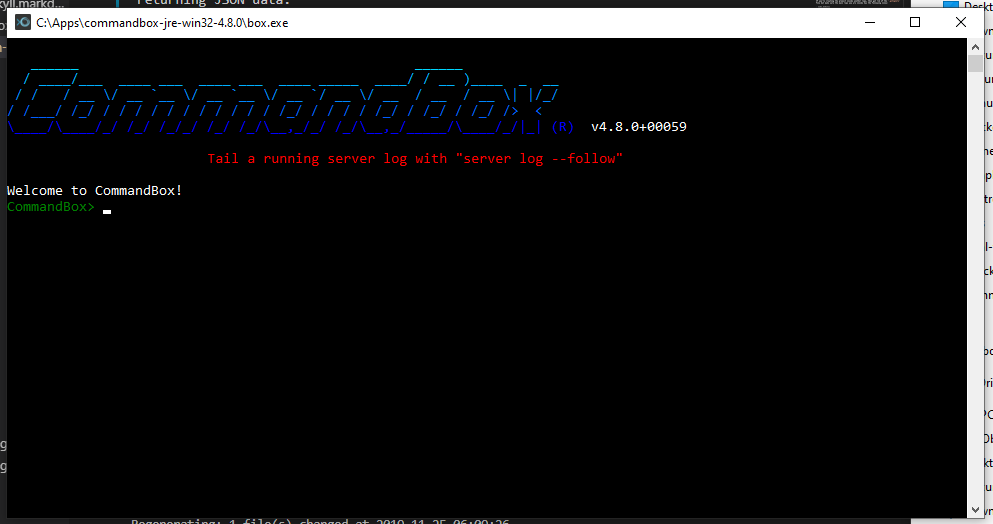 I prefer to run this via Windows PowerShell and the built in terminal in VSCode, which can be achieved by adding CommandBox to your Windows path.

The Ortus Solutions site helpfully has a decent installation section with a link to another guide for setting up your Windows Path: CommandBox Installation

Once CommandBox is installed and running, you can create a very basic file to serve some JSON content. Put this api.cfc somewhere on your filesystem with the following content:

This funciton simply allows “remote” access via the browser and returns the array of people. In CommandBox, move to the directory containing this file and run start port=8080 (or box start port=8080 if you’re not inside the Command Box program ).

Once that is succesfully running you should be able to access the CFC in the browser and see the JSON response:

Open this URL to view the JSON:

Now the backend is serving JSON, we can start building the Vue app.

You’re going to need to have npm installed and then install vue-cli. I wont go into details on how to do all that as the Vue CLI documentation covers that for us, you can check it out here

Note: npm would error during installation unless I ran powershell as administrator. Once my packages are installed I closed and re-opened it as normal

Using the command line (in my case Powershell) go to the directory you want to create your project in and type vue create .. Alternatively you can make a new folder with vue create vue-cf-together

Once you’ve triggered the create command, you’ll need to select features the features you want to use. You’ll be asked to choose from a preset, or manually select features.

Choose to manually select, then ideally save this to your own preset so you don’t have to do this every time.

For the “CSS Pre-processor” select Sass/SCSS (with dart-sass)

vue-cli should start building the project for you.

Also not the command line will display the URL with the port number to access your Vue app. 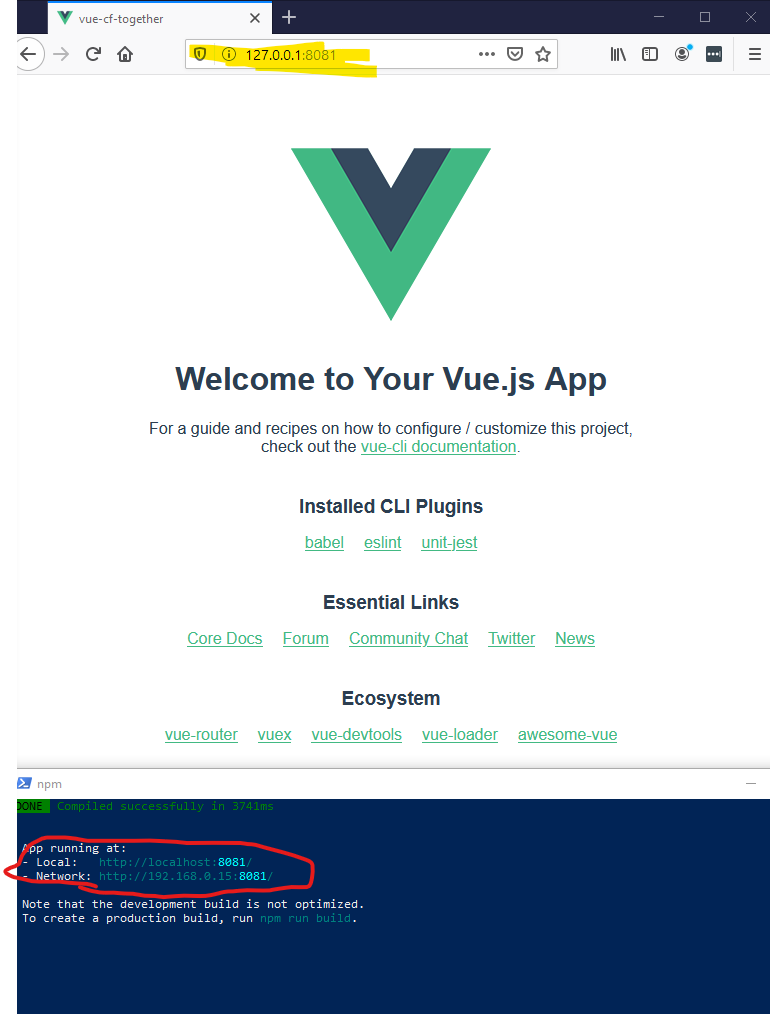 Modify the top level App.vue file which is in the vue-cf-together/src/ folder. Get rid of that default template and comment out the HelloWorld references for now, we’ll change them in a bit.

With npm run serve still running you should see a quick compile in the console and the page should reload in the browser itself to show this wonderful page:

If you are seeing that, great! If you’ve played around with the template (or copy and pasting hasn’t quite worked) then you might get a bunch of errors like this: 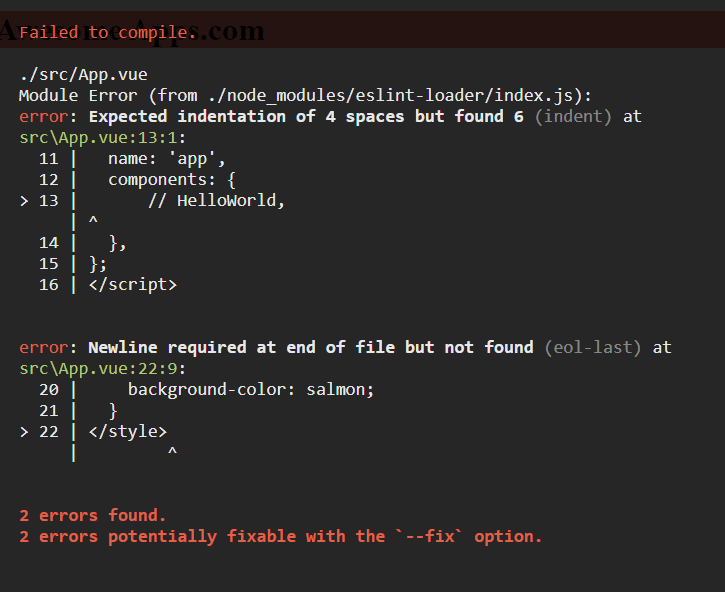 This is because we selected the “Airbnb linting” which checks your code to make sure it follows the very popular Airbnb Javascript Style Guide.

Now you don’t have to do this but I recommend it as it helps to minimize mistakes as you work and you can customise the rules (2 vs 4 spaces, camelCase vs underscore_variables etc)

Just try and fix the errors that are listed and they’ll show up as you make changes (lint on save!) so you can deal with them as you go.

We’re getting to the best part now, getting your locally served CFScript AJAX API pumped into your vue-cli app.

We need to create a proxy server and a project path for the vue-cli server to find the Coldfusion API, as they’re being served on different ports (by npm/node and commandbox/lucee or something similar)

Create a vue-cf-together/vue.config.js file to include the following proxy settings in a devServer block.

This will redirect API calls to the Lucee server and for development allow us to ignore https/CORS issues.

If you get that setup properly, then we’ll be able to visit this in the browser: http://127.0.0.1:8081/api.cfc?method=getPeople&returnFormat=json

This URL is almost exactly the same as the Lucee server itself apart from:

So we’ve told the vue app to send certain requests to a different port, in this case the api.cfc requests.

Calling the API from the application

We’ll make use of a second vue file to make calls to the API using https://github.com/axios/axios

Then update People.vue to contain the code below:

Make sure npm run serve is running and the browser should show you this even more amazing app, with the People.vue component rendered:

axios will make calls to the api, axios-cancel is used used to stop race conditions with ajax calls.

Then update the People.vue file to be like this, which will add buttons to add/remove people and make an AJAX call to get the CF file’s getPeople method

Clicking “Get People!” and “Remove People!” should toggle the app between these 2 states (making an AJAX call visible in the dev console with each “Get People!” click)

Now we have a perfect app, with hot module reloading and a proxy server to our Coldfusion API, we’re almost ready to build for production and get this app embedded inside our main website!

So ideally, you should have designed your tests before hand. You want to be writing them first, so you know what you want, watching them fail, then fixing your code till they all pass.

Maybe not quite as strict as that, but in general, make sure your writing tests and if you find a bug, write a test, watch it fail, fix the code, watch it pass.

We’re going to test that our People.vue loads, renders an empty list and shows a warning,.

Then run npm run test:unit (you might have to stop your npm run serve command) and hopefully you’ll see an output like this, which shows: 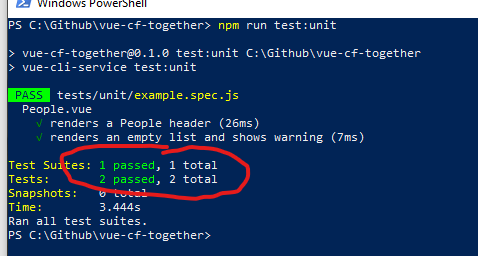 I dont’ want to spend too long on unit tests here, but these can and probably should get much bigger and more complex. I’m still not great at testing, don’t add enough, but I’m doing more than I used to and it’s massively helpful.

In short, the above tests do the following:

To make sure our tests are always run when building for production, add "prebuild": "npm run test:unit", to the scripts section of the package.json file to make sure our unit tests always get run before we make a production build.

Then you can run npm run build which should build a deployable version of our app into the dist/ folder, also making an index.html file for us.

The contents of dist can be served alongside your api.cfc on your CFML/Lucee/Coldfusion server in production, as the compiled .html/.js files don’t need Node, just a normal webserver (Apache/Nginx etc).